Place of Origin. Museum That Conveys and Connects the History and Culture of the Ainu People, Starting from Here and Evolving.

Museum as the Central Facility of "Upopoy", a Symbolic Space for Ethnic Harmony

The National Ainu Museum opened as the central facility of "Upopoy", a symbolic space for ethnic harmony centered on Lake Poroto in Shiraoi-cho, Hokkaido. Lake Poroto is surrounded by natural forests and mountain ridges offering a rich environment full of water and greenery, and the site of the museum is located at the point where the ridges break off and connect to the town.
The Ainu people have a long history, and each region has its own unique culture. Therefore, it was difficult to find a form of architecture that represents the Ainu from their diverse cultures. What was in common, however, was the wisdom of the Ainu people who have lived together by making use of the blessings of nature. The tools, clothing, and housing of the Ainu people are made from natural materials close at hand. Our idea was to respond to the spirit of the Ainu people by learning how they interacted with everything in nature, from these tools to animals to plants to natural phenomena, and by exploring how the museum can exist in harmony with nature. 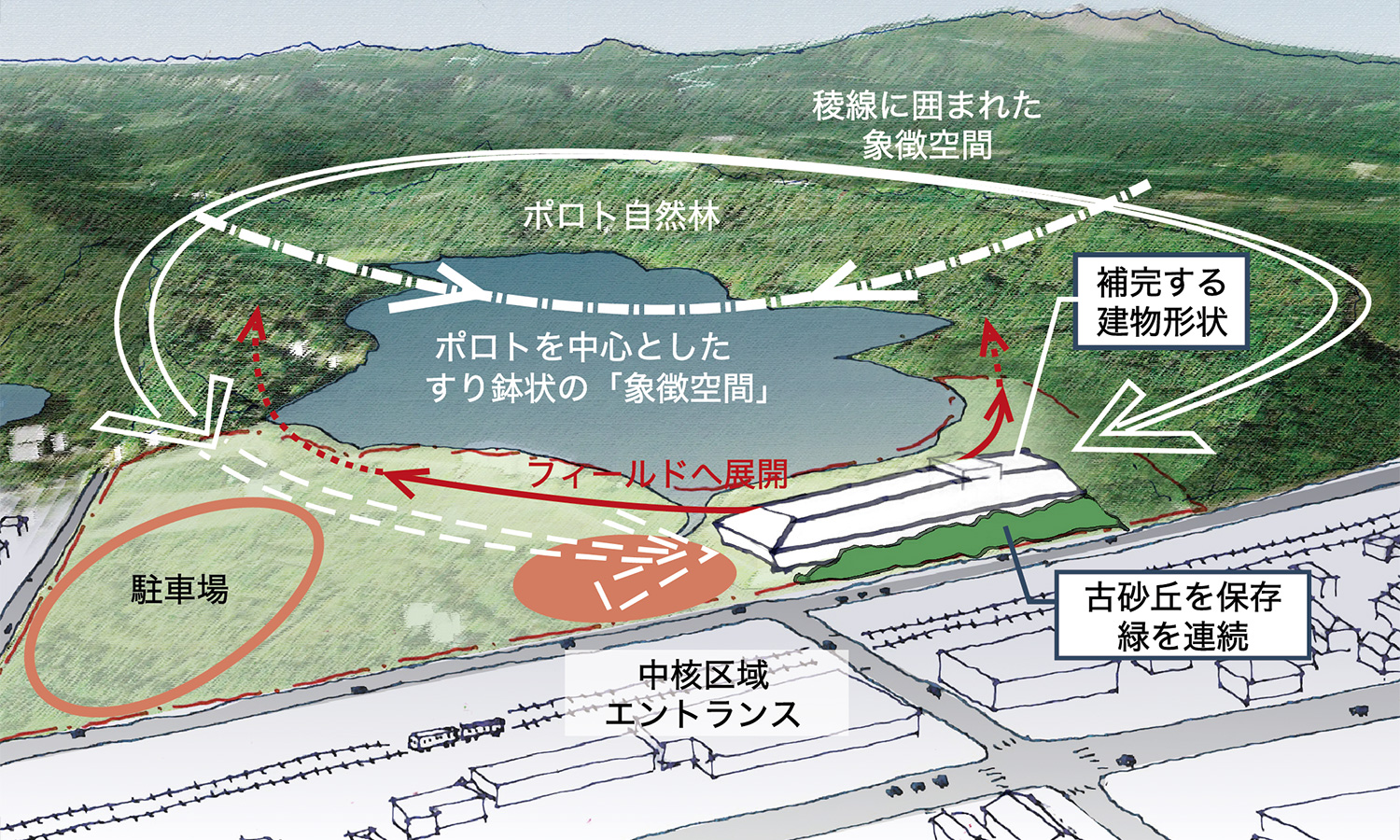 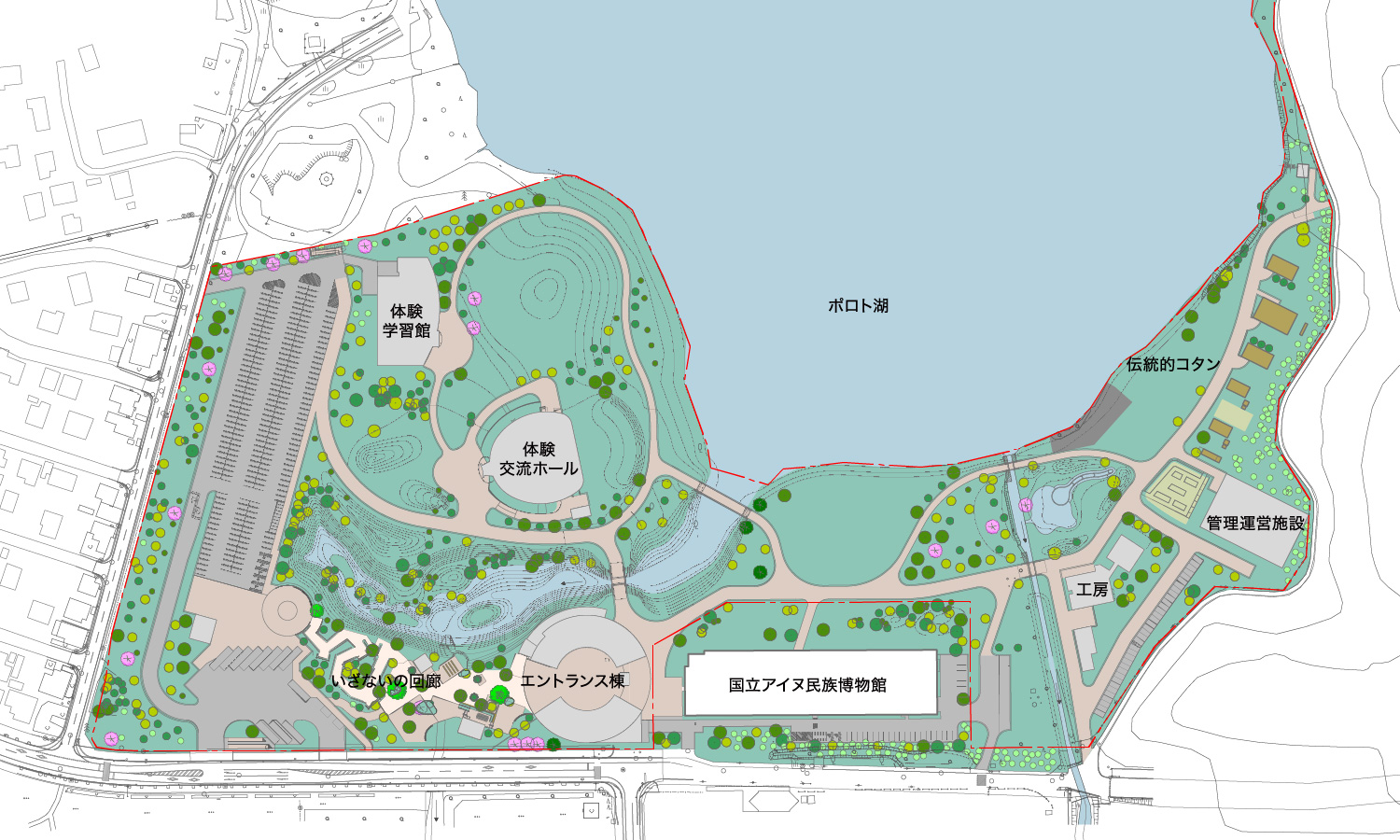 In Harmony with the Surrounding Environment Centered on Poroto

The museum has a total floor area of 8,600㎡, and the most important exhibition rooms and storage rooms are placed on the second floor to prevent flooding, resulting in a shape similar to the Ainu storehouse called "pu" on stilts in which the second floor overhangs grealy, supported by the base on the first floor.
The distinctive second floor is wrapped in a gently curving Dutch-lap roofing of titanium alloy that reflects the greenery and sky, creating an expression that changes with time. The long and wide outline of the building connects with the ridges of the mountains, and the form extending out to the lakeside envelopes the symbolic space spreading out to the lake in a bowl-shaped manner, inviting the viewer into the world of the Ainu. 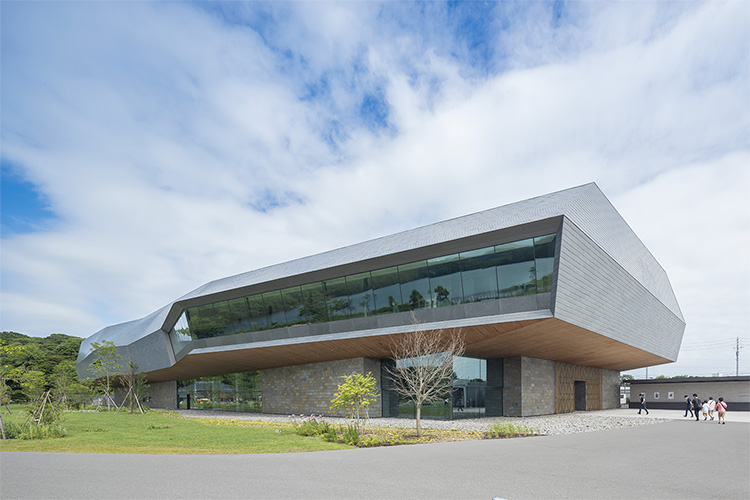 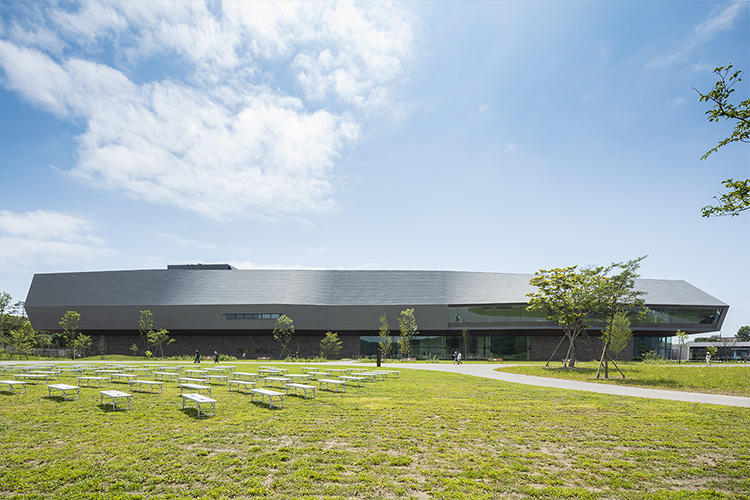 BIM was fully utilized in the design phase, and three-dimensional shapes developed using Rhinoceros and Grasshopper were imported into BIM to integrate the architectural design with structural and MEP engineering designs.
The exterior walls that enclose the large spaces on the second floor that require constant temperature, humidity and air conditioning, such as the storage and exhibition rooms, are externally insulated double-shell structure, in order to maintain a stable environment against the harsh outdoor environment in the cold region. In addition, the environmental performance of the most important rooms is improved by circulating air conditioning exhaust between the outer and inner shells (a method called cascade air conditioning.)
For the structure, a truss structure that uses the double outer shell structure is adopted, which connects to the cantilevered end of the second floor and wraps the building from the roof to the second floor. It is designed to minimize the vertical displacement of the cantilevered part and the long-span part of the exhibition room. 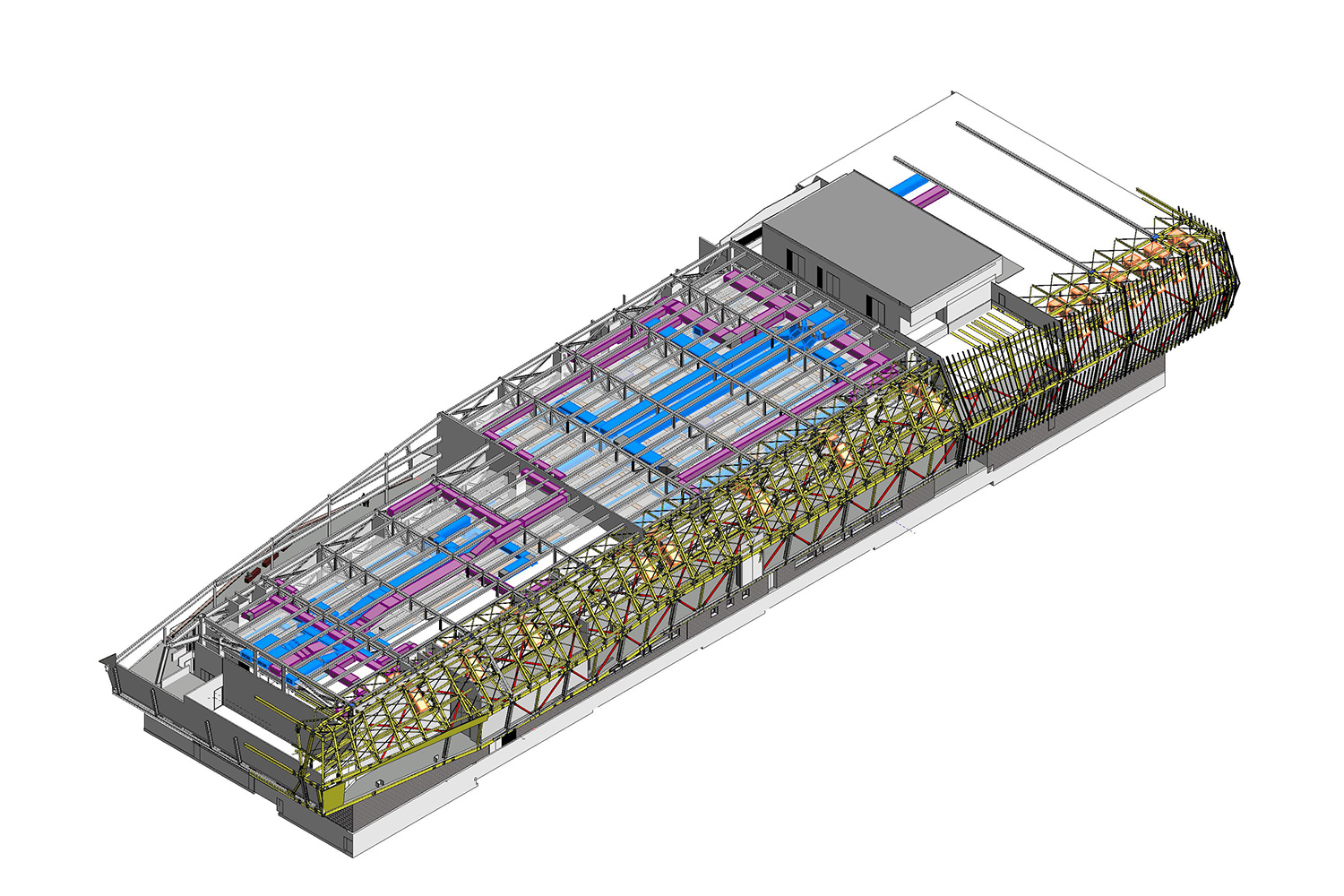 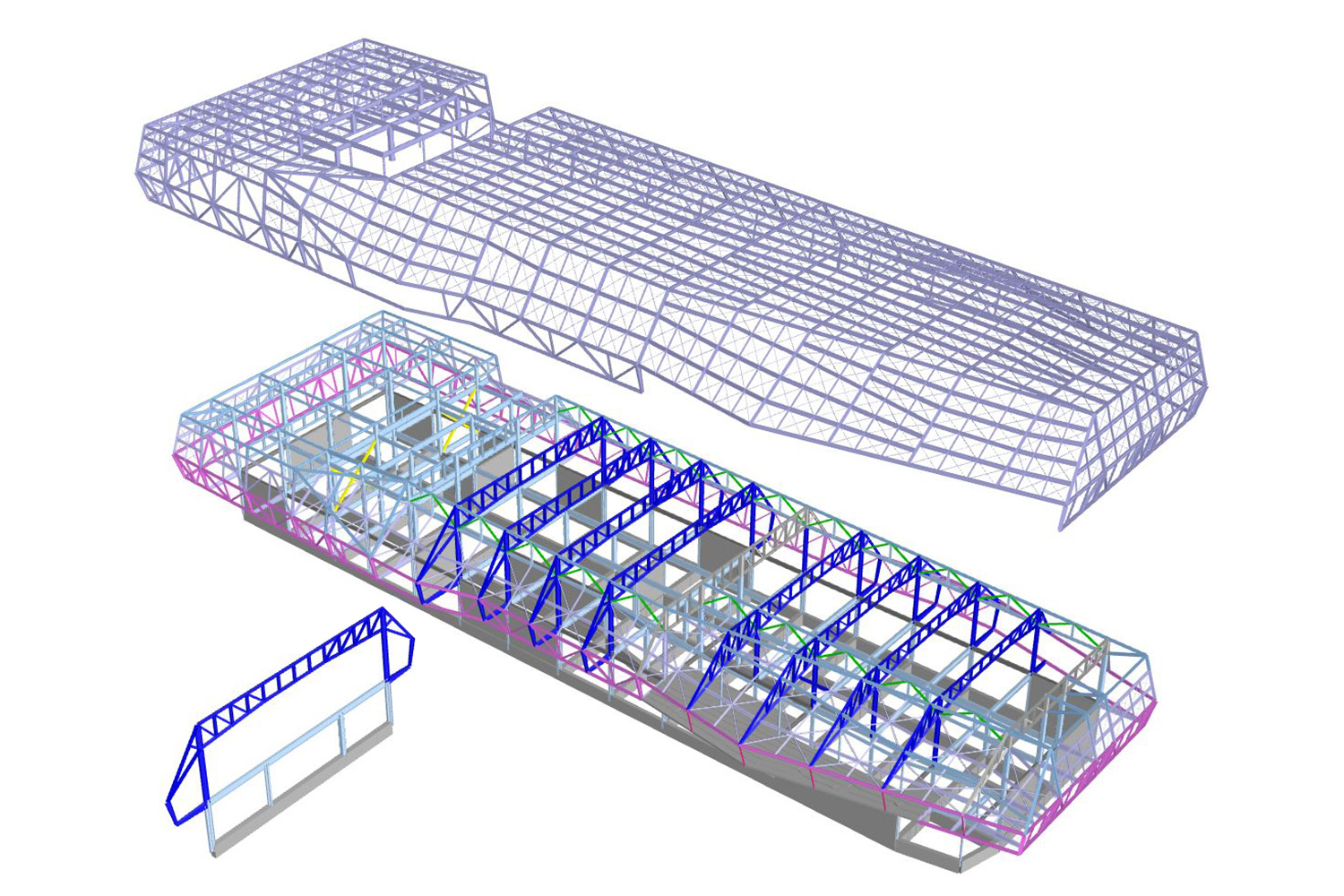 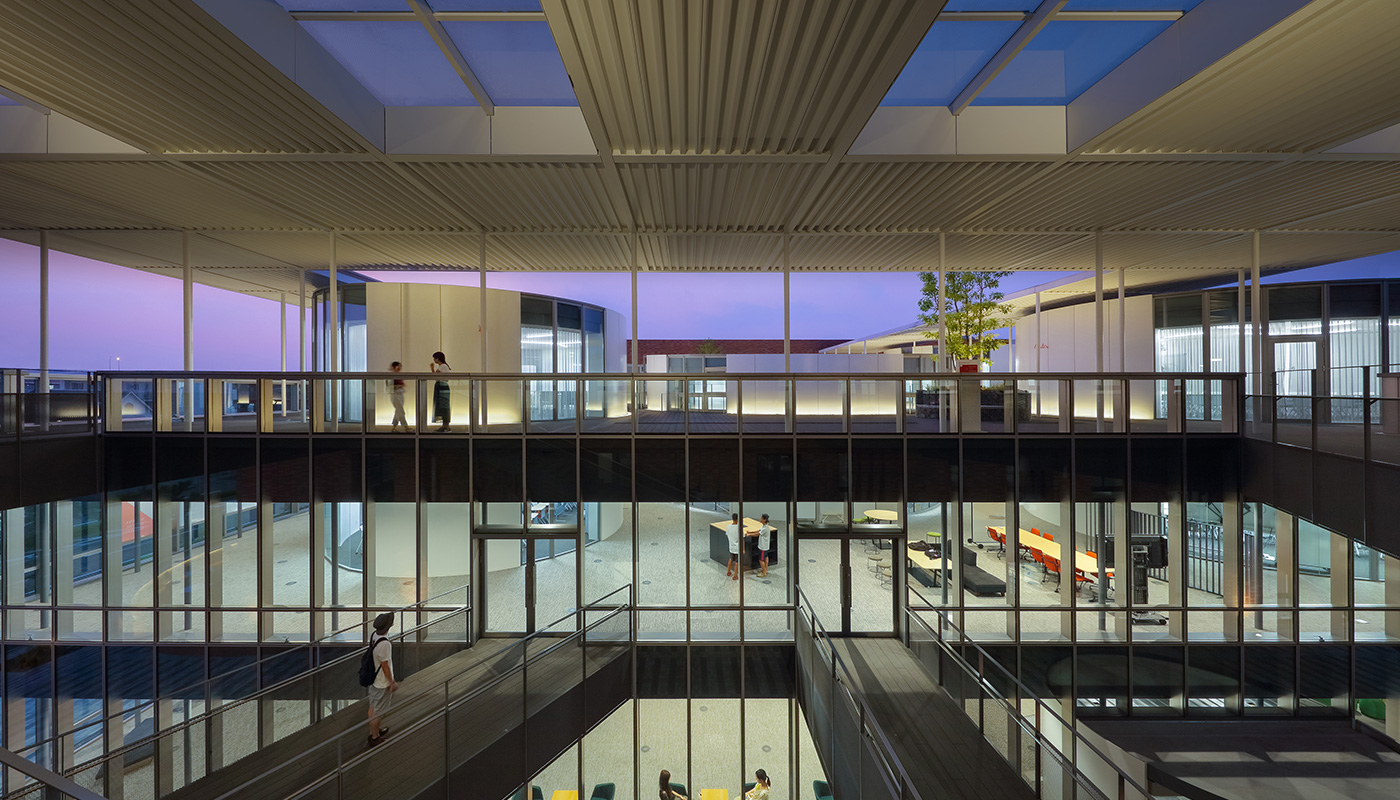 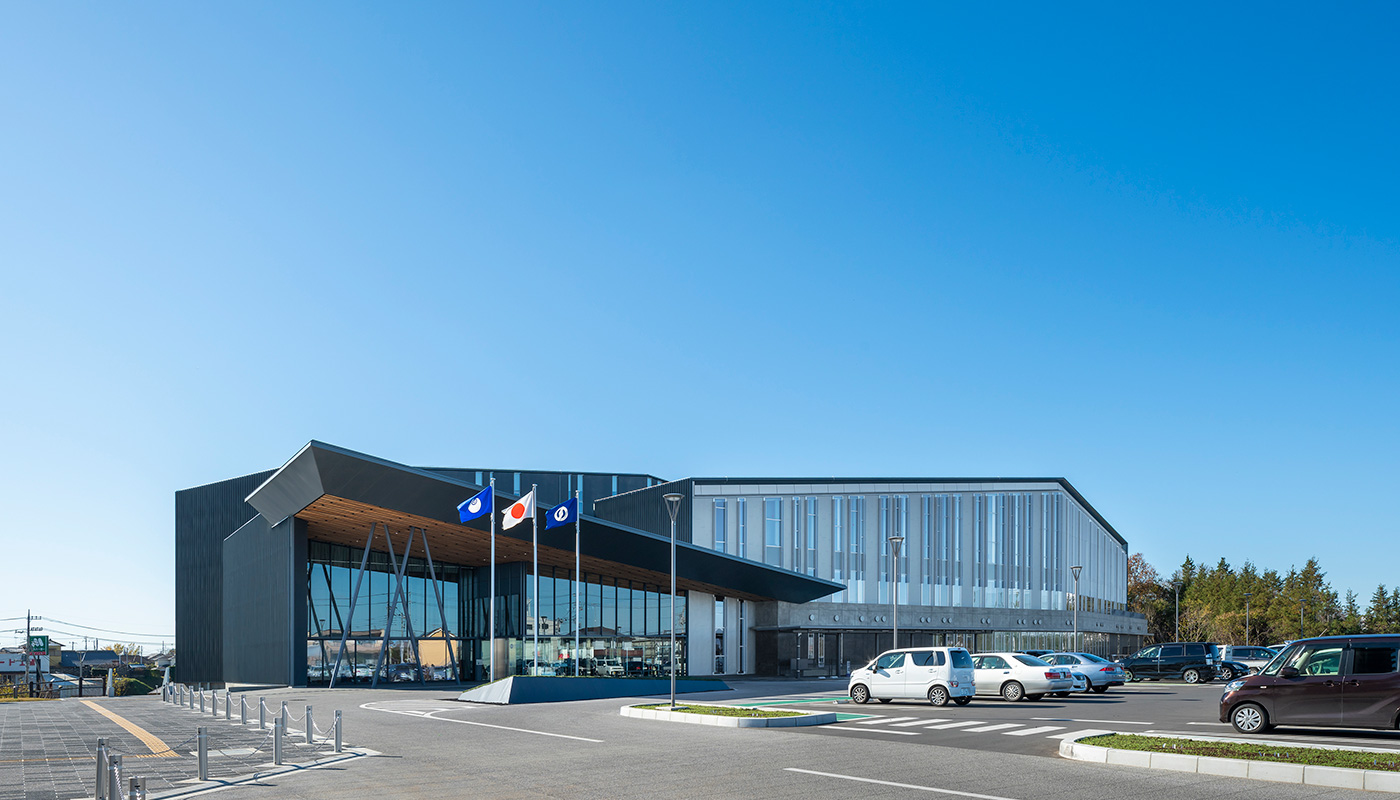 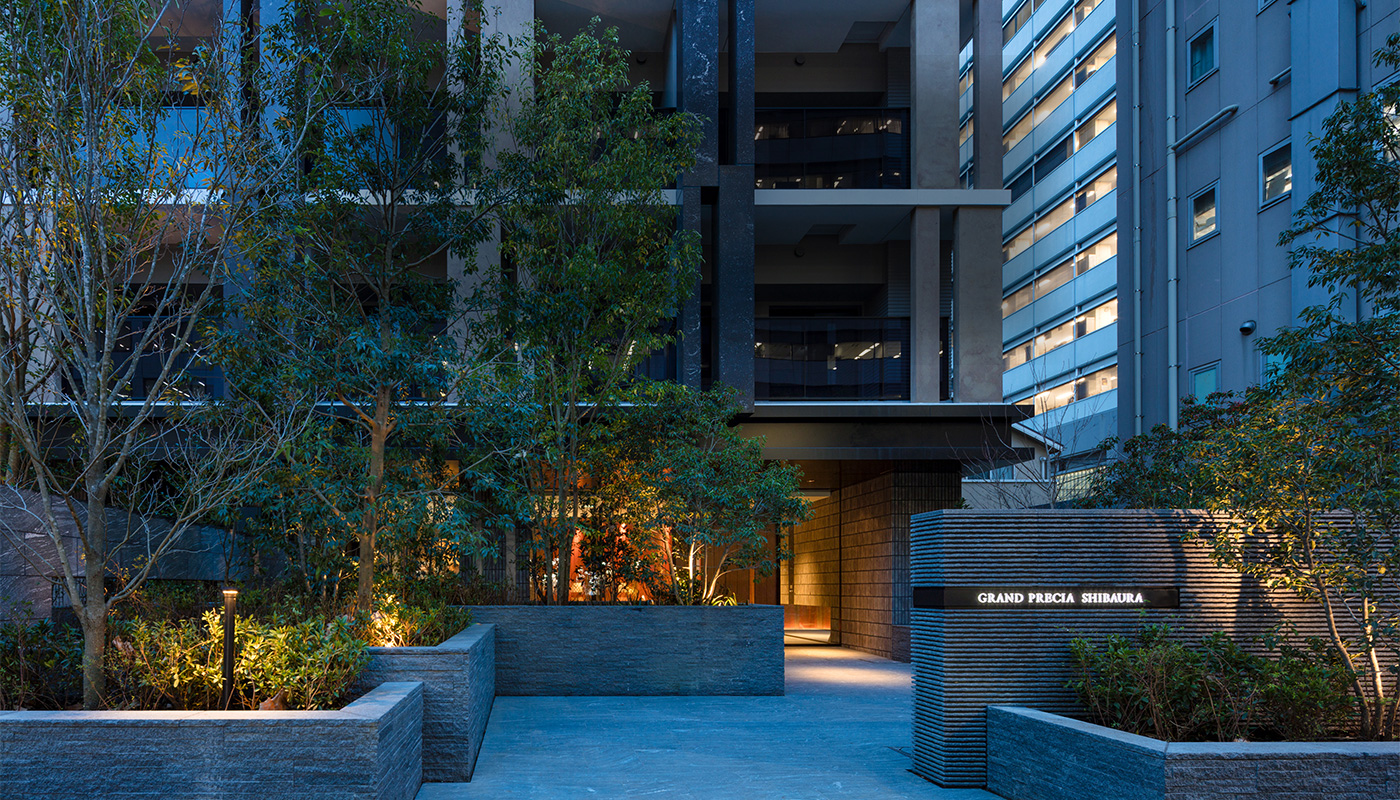